Recently, I’ve been reading the Gutenberg Galaxy: The Making of Typographic Man, that famous work of Marshall McLuhan, and it struck me that many of his insights relating to print media and reading culture can be applied to what is happening today, exactly 50 years after its publication in 1962.

One of the major points  McLuhan seems to be making is that the invention of print is closely connected to detribalization. McLuhan describes detribalization as an over-reliance on linear thinking which detaches the human being from the world around him due to the emergence of a new sense of “objectivity”.

To illustrate these ideas McLuhan takes us on a tour through medieval reading and writing culture. Regardless of what we may think of his philosophical ideas, the way he describes the production and reception of medieval literature is interesting in and of itself. As strange as it sounds, in some ways medieval literature may be a key to understanding electronic publishing.

1. From Isolation To Integration Of The Senses

“If a technology is introduced either from within or from without a culture, and if it gives new stress or ascendancy to one or another of our senses, the ratio among all of our senses is altered. We no longer feel the same, nor do our eyes and ears and other senses remain the same.”

McLuhan argues that due to the invention and proliferation of print, the visual sense of man has been (over)stressed to an extent where it becomes isolated. This can be seen in an extreme in the example of speed reading courses where students are taught to disconnect the eyes scanning the text from the inner verbalization, thus speeding up the information intake.

Compared to most modern writing in books and newspapers, in medieval times the writing in manuscripts looked very different, almost as if it wasn’t meant to be read as much as meditated upon. 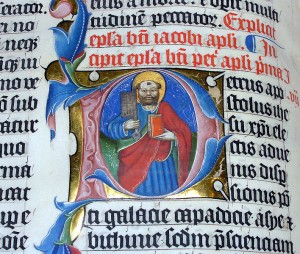 In addition to the very visceral style of the letters, these manuscripts were full of colorful illustrations and marginalia.

One could argue now that they seem far more visual than our modern blocks of immaculate black & white paragraphs, but it’s true only in a superficial sense. In fact, if we study the way people produced and read these manuscripts, we find that these works were not generated through isolation of the visual but portrayed an integration with all the other senses. These manuscripts were immersive in the truest sense of the word, inviting the reader to participate with heart, mind, body and soul, as it were.

The ebook and the way electronic texts are being published show signs of returning to a more holistic harmony of the senses, at least potentially:

“[T]he Middle Ages for various reasons and from various causes did not possess the concept of ‘authorship’ in exactly the same significance as we have it now. Much of the prestige and glamour with which we moderns invest the term, and which makes us look upon an author who has succeeded in getting a book published as having progressed a stage nearer to becoming a great man, must be a recent accretion. The indifference of medieval scholars to the precise identity of the authors whose books they studied is undeniable. The writers themselves, on the other hand, did not always trouble to ‘quote’ what they took from other books or to indicate where they took it from; they were diffident about signing even what was clearly their own in an unambiguous and unmistakable manner.”

For the last few decades, books have been increasingly connected to their authors. Often, books were only published because their author was a public figure, however marginal. The interest in the person of the author came first, and the text itself was only read because of what it revealed about its author. The very essence of book marketing hinged on the person of the author, promoting the work through talkshows, book signings, etc. This is still very common today, but it seems the significance of authors has reached a climax and is challenged by new modes of electronic publishing.

If people like a picture, a song, or an article on the Internet, it is often completely irrelevant who produced it, except for the fact that knowing the source will lead to more and similar works. The blogging platform Tumblr is a good example of this. Something gets reblogged, not necessarily because its author is well-known, but because the image/song/text speaks to the blogger and she wants to proliferate her own experience/opinion/feeling through the medium of the discovered artifact.

Also, in the field of independent book publishing we see a trend where authors need to become ever more creative and inventive to bring their works to a public who doesn’t know or care about the author while potentially being very interested in their works.

The growing disconnection between author and artifact leads to another important issue: copyrights. The burning debates at the moment, as I see them, are not so much about the morality of pirating but rather about the changing entitlement of authors and artists. In a way, it’s already to late for arguments. The fact that we are having these discussions only shows that author and artifact have already lost the cemented relation they enjoyed only a few decades ago.

“To copy and circulate another man’s book might be regarded as a meritorious action in the age of manuscript; in the age of print, such action results in law suits and damages.”

Social Media seems to return us to this more tribal state where “pirating” (in a strict sense, even posting a picture on Facebook or Pinterest is piracy) is not viewn as a perpetration, but as a sign of respect.

It’s also said that if there’d been copyright laws as we have the today in the time of Gutenberg, the printing revolution would never have happened.

The current copyright wars can be understood from three different camps:

We shall see in the following years whether the first group (which is also the older one) will be able to withstand the growing demand and insight of the second two.

But again, the fact that we’re discussing this at such a large scale at the moment only shows that the old mode isn’t working anymore.

While artists and their representatives turn into policemen, prosecuting consumers with the help of Internet providers and governments, a new global tribe is growing which is based on an economy of sharing, substituting the system of direct compensation with more indirect and subtle approaches that make for both an accelerated proliferation of works of art and encourage the production of more.