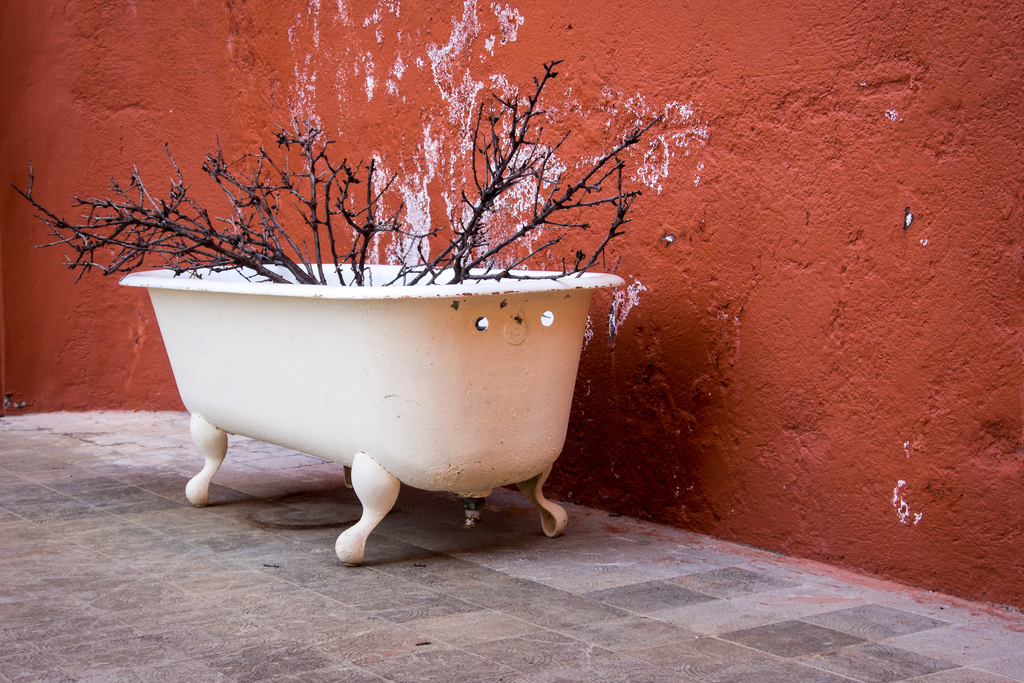 s human beings, we live in a world of things. There are small ones, big ones, raggedy, round and shiny things all around us. Some of these things are made in factories, others are made by hand. Some are complex, others seemingly simple. Some are expensive, others are cheap. Some are revered, others just lie around.

As long as things are useful we treasure them. And when they are used up, they land on the trash. The dividing line moves swiftly and before we know it, today’s eagerly ogled artifacts are lining the bottom of tomorrow’s landfills.

They are all around us – seemingly meaningless, always on the verge of oblivion.

In the course of a single day we come into contact with a lot of things we don’t seem to appreciate beyond their immediate functional value. Things like plastic shopping bags, onetime dishes, styrofoam cradles, shrink-wrap and bubble-wrap, colorful candy bar skins and disposable lighters. They are all around us, yet seemingly meaningless, always on the verge of oblivion. Once they have fulfilled their function, delivered their payload, so to speak, they are discarded (or replaced) as if they never existed.

Even when it comes to more expensive consumer goods such as entertainment electronics, after the first burst of euphoria and showing off these new gadgets to friends and family, in how far do we really relate to these things? Perhaps the question itself seems strange to us. Why even consider relating to things beyond their immediate utility value?

It has been often suggested (and is even a kind of cliche by now) that in order to become better people we ought to be more in touch with nature, by killing fewer animals, eating more plants, drinking more tea, etc.

And although this attitude increasingly appears not as part of a conscious ideology, but more of a “feel-good” approach to life, we somehow seem to intuit that by having a better relation to flora and fauna, me might improve the well-being of ourselves and others.

Fair enough. And yet, with all the emphasis on saving the jungles, protecting wildlife, vegetarianism, veganism, and so on, don’t we seem to forget inanimate matter? What about minerals, metals, liquids and gases? The stuff our world is made of, what we call “natural resources” — the ground we stand on, the air we breathe, the stuff of our economies and key ingredients to everything we build in our factories. Shouldn’t we start there?

People write instructions about how to get in touch with nature, filling our lungs with smog-free air, feeling the sand under our feet, fondling moss-covered trees and enthusing about the slick and smooth surface of stones. That’s all great, but how much moss, bark and untouched shore is there really in our daily lives? Perhaps we should start with the stuff that surrounds us: the brittle smoothness of disposable coffee cups, the almost frictionless smeared glass of mobile phones and the semi-rubbery surface of keyboard keys.

Maker In the Making

Whereas nowadays factories churn out an endless maelstrom of stuff based on market demands, there used to be a time where individual products were crafted for individual needs. For example, when you wanted a new suit you needed to go to a tailor, when you required a new table you had to contact a carpenter and so on and so forth. The artisan then went to work on your order, crafting a new suit or piece of furniture, and — over the course of many days, weeks or even months, the creative process forged a bond between the maker and his creation, up until the point where she may even have been a bit hesitant to finally let go of her work.

This relation to things has been largely lost, partly because we just don’t make stuff ourselves anymore but just buy it. The process of custom-tailored production still exists, but for the the majority of people it remains a luxury. Today, everything from furniture to computers to clothing comes from the same factories, rolling from endless conveyor belts straight into our homes. Often no human labor is required in the production process, and if it is, it will soon be made redundant by even better machines.

It’s very rare that we interact with things today which were fully created and gently coaxed into existence by one human being from start to finish. Most of the things we buy and own can be easily replaced, and as soon as the next, better and faster iteration along, we gleefully abandon their predecessors.

In short, we live in a Wegwerfkultur, a use-and-throw culture, and while the environmental effects of this culture, i.e. pollution and structural unemployment have been well-documented and oft-lamented, it’s much less clear how this way of life affects our thinking and relationships.

We adopt and drop world-views like disposable coffee cups.

For example, where our grandparents’ generation was often subscribed to a certain religion or ideology for a large part of their life, we don’t seem find this kind of commitment anymore. Today, someone may be an atheist, tomorrow he’ll be a Vegan, then straight-edge, revivalist, Buddhist or venture capitalist, depending on the current peer group and what is trending on Twitter. In short, we adopt and drop world-views like disposable coffee cups.

Similarly, some people find their relationships to be changing faster than the weather, from single to “just friends”, then “friends with benefits”, perhaps even engaged or married, then divorced, and back again to square one. In a sense, the one-night-stand may be the perfect metaphor to describe how the use-and-throw culture affects our social lives. When we are interested in other people only as a means of fulfilling our own desires and fantasies, how can we possibly build meaningful and long-lasting relationships?

The Vortex of Virtual Space

Instead of idealizing and romanticizing the past– which certainly wasn’t always better– or trying to proclaim some new form of frugality or environmentally aware lifestyle– which is fine — let’s ask a different question entirely.

For example, when you observe how people handle their mobile phones, cradling them in their hands, caressing them with soft swipes and brushes of the fingers, wistfully smiling at their glowing rectangles, one can easily get the impression that there is some kind of slender thread connecting user and device.

It may not be the same connection as with the handcrafted table, where every groove and hand-sanded curve echoed the dedicated labor of another human being, but perhaps it’s a new kind of relation in the making.

And while our desks are slowly getting lighter, their dead weight sucked into the vortex of virtual workspaces, now one thing has replaced a thousand others. Our phone has stopped being just a phone a long time ago. We all carry an ever-growing library, post office and news agency in our pocket.

And maybe we have become lighter, too, less burdened by the unavoidable persistance of stuff, free to relate again in a different way.