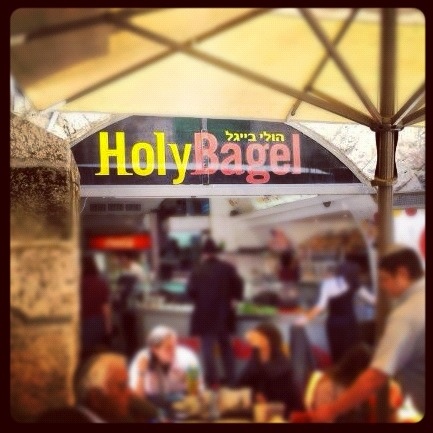 For years I haven’t been to this city capturing the imagination, horrors and hopes of millions through the ages.

There are a few things which struck my mind this time:

Walking though the old city among masses of tourists from all over the globe you almost expect some disneyfied savior to leap out of the stones that have seen it all. Whether it’s the themed fast food stalls (holy bagel anyone?) or the high-heeled mothers, aunts and older sisters of bar mitzvah boys posing in front of the wailing wall, there’s an eerie sense of cultural commodification.

The funny thing though is that there’s nothing wrong with it at all. There’s still tons of people praying and doing their authentic cultural thing the masses are so eager to experience. But as the snapshot happy tourists press onwards through the Armenian, Jewish, Muslim and Christian quarters (where’s the pirate quarter?) consumer culture seems like the most natural and logical extension of the Abrahamic cradle.

Apart from the Holy Disneyland, the city is busy upping its image as a modern bustling metropolis (less than 800,000 inhabitants) with the silver light train zipping from hill to hill, sprouting skyscrapers and of course the Chords Bridge. P.S.: The title of this blog post might be misleading. There’s nothing about Jerusalem at night in here but at least it was written in Jerusalem at night and changing blog post titles after the fact is a bad habit of mine, so I won’t try hard to come up with an effortless looking title at this hour…

P.P.S.: Here’s a little sound recording from the old city. Feel free to listen or download and use in your projects