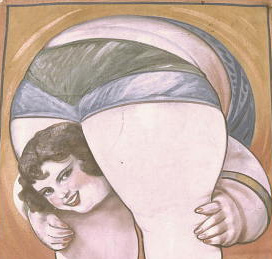 Recently I read an interesting article that looks at the facts and numbers of Facebook’s business model.

“On the one hand, Facebook is mired in the same relentless downward pressure of falling per-user revenues as the rest of Web-based media. The company makes a pitiful and shrinking $5 per customer per year, which puts it somewhat ahead of the Huffington Post and somewhat behind the New York Times’ digital business. (Here’s the heartbreaking truth about the difference between new media and old: even in the New York Times’ declining traditional business, a subscriber is still worth more than $1,000 a year.) Facebook’s business only grows on the unsustainable basis that it can add new customers at a faster rate than the value of individual customers declines. It is peddling as fast as it can. And the present scenario gets much worse as its users increasingly interact with the social service on mobile devices, because it is vastly harder, on a small screen, to sell ads and profitably monetize users.”

According to this article it’s just matter of time before the Facebook ad bubble will burst and take hundreds of other sites relying on the same principle down with it.

But what I find even more surprising is that although Facebook can boast with more users than any social networking site in history, it feels like a graveyard.

To give you an example, I administrate various fb pages for businesses, with “like” counts of up to 22,000. The inflationary nature of Facebook turns that into a few dozen active users. This activity can be pushed by posting ‘engaging’ statuses and photos, etc. of course, but I still can’t shake the feeling that Facebook is a social desert. Maybe there’s a correlation of large user bases and low activity, maybe people are just tired of liking and sharing.

“Hunt many rabbits, catch none”

Whereas Twitter is very limited in what it does, Facebook tries to do and be everything from photo sharing (and making) app, to event management, contact database, gaming platform and emailing service.

I don’t have anything against the principle of sharing a few photos with family and friends, but the Facebook platform seems to have spiraled out of proportion like a rapidly spreading tumor.

Facebook has the scale, the platform, and the brand to be the new Google. It only lacks the big idea. Right now, it doesn’t actually know how to embed its usefulness into world commerce (or even, really, what its usefulness is).