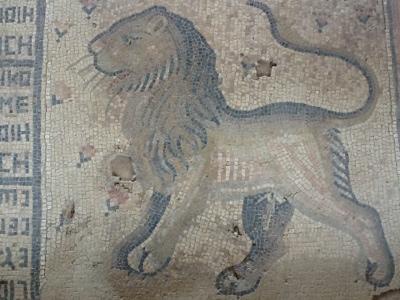 Last week I visited Tiberias, that small town next to the Lake of Galilee. Looking for nothing in particular we stumbled over a little garden/open air museum which was home to a few hot springs, an ancient hammam of Suleiman and archaeological remains of an ancient synagogue.

Of the synagogue there’s not much left except a beautiful mosaic. Seeing the images I took some photos with the intention of using them maybe as book covers in the future.

Little did I know that what I was photographing would no longer exist one week later. Here’s one of the photos I took:

Today, while working on a new ebook (which incidentally uses part of the Tiberias mosaic as a cover…) I stumbled over an article in HaAretz talking about recent acts of vandalism at the site. They also posted pictures with their article. Here’s one: From what I could gather from the article it seems that the vandals where ultra orthodox Jews protesting against the principle of archeology and/or tourism because it allegedly disturbs the graves of their ancestors.

I don’t have enough background to say whether the excavations of Tiberias were indeed unearthing ancient bones, but I’m pretty sure that whoever built the synagogue and invested countless hours in creating these dazzling mosaics is probably turning in their grave.

The artless defacing on these stones somehow reminds me of German neo-nazis spraying swastikas on Jewish gravestones. The fact that it’s now Jews defacing Jewish stones makes absolutely no difference. Stupidity has no nationality, or religion for that matter.

But instead of complaining about it, let’s look at some more pictures of the mosaic before these acts of righteous idiocy. 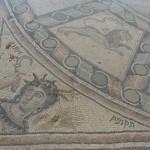