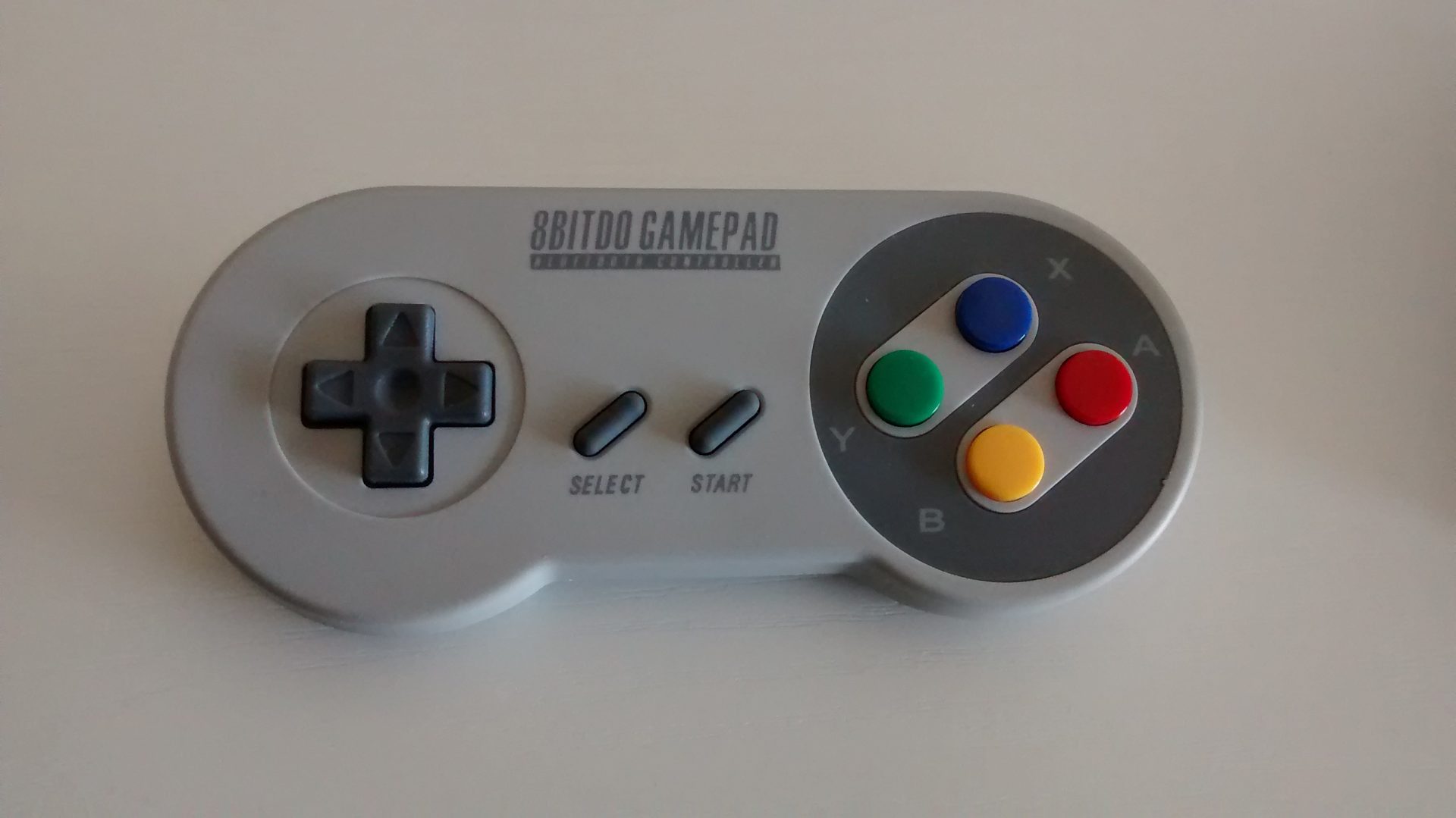 hile working on the latest two book and audio releases, I rediscovered the fun of playing old Super Nintendo games during downtime, the simple joy of quickly firing up Super Mario World in an emulator, stomping a few Goombas, flying high through pixelated skies, before going back to the grueling routine of editing, formatting, compiling vocabulary lists and whatnot.

But it was only so long before I realized that playing these classics on a keyboard didn’t just feel awkward, but it also made the gameplay so much harder — especially in games that are all about timing, getting that jump-off point just right and stopping and turning on a dime. So I started browsing the web for a reasonably priced, simple controller that would let me sit back and enjoy these oldies the way they were meant to be be played.

The 8bitdo SFC30 immediately struck my fancy because it’s a very faithful reproduction of the time-tested world-famous Nintendo controller that molded my generation’s juvenile hands. Not only does it feel and function exactly like the original (bigger paws notwithstanding), it’s improved with bluetooth and a variety of different modes, so that it can be used on almost any device or platform. 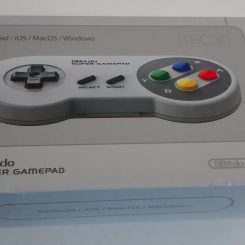 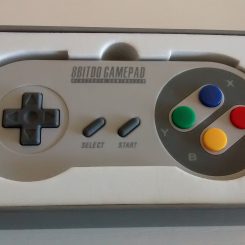 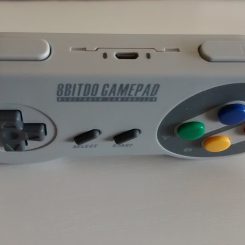 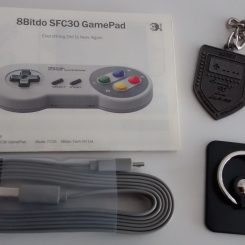 It comes in a nicely packaged box with a mini-USB cable (for charging and direct connection), a little prop-up stand, and a key holder that celebrates 30 years of “Famicom”, the Japanese version of the NES. Apropos geographical differences, the European version of the SNES shares the exact same casing and controller design with the original Japanese “Super Famicom”, whereas the US version is slightly different (see Wiki for a comparison), so if you’re looking for an exact replica of the original US gamepad, check out the SNES30 by 8bitdo.

During the holidays my sisters, brother-in-law and I put this thing to the test, playing some old classics on the MeSNEmu emulator for iOS (no jailbreak required) and rediscovering the mind-bending genius of Braid on PC, which is so much better with a controller. We even used the SFC30 to play through a bit of the Grim Fandango Remastered edition on the big screen, whose “tank controls” really lend themselves to gamepad control. Before we knew it, we had sunk a couple of hours into it, and quite frankly, I’m surprised by the build quality and how well this piece of plastic holds up even to intense button-mashing sessions (haven’t thrown it across the room yet, but been close a couple of times … darn those blinking Koopa shells!)

Apart from functioning as a standard bluetooth controller or plugged-in via USB cable, the SFC30 can also be used in “touch emulation” mode, which allows you to map on-screen touch controls to physical buttons — a great feature to experience mobile favorites in a new way! More about this further down.

So if you’re looking for a simple controller to revel in pixel-nostalgia and control almost any application on Android, iOS, PC or Mac, I can’t recommend the SFC30 highly enough. Needless to say, being modeled after a piece of tech which is more than two decades old, it has no analog stick, gyros or fancy special buttons, but I actually like the simplicity. Plus, it’s a lot of fun to get it to talk to different systems and I’m still looking forward to hook it up to a music app and use it as a simplistic MIDI controller via keyboard-mapping. “Kick punch, it’s all in the mind …” You could probably even use it to control your Powerpoint presentation, if that’s how you roll. On second thought, don’t! Powerpoint is the scourge of mankind.

In order to use this (or any controller for that matter) on PC games with no official gamepad suppport, the “Joy2Key” program is a great tool to map buttons on your controllers to keys on your keyboard. To make it work with the SFC30, just set the gamepad to Joystick Mode (Mode 2), by pressing Start + C.

If you want to use the touch emulation mode on iOS, the device needs to be jailbroken and used with the 8bitdo app which has since mysteriously disappeared from Cydia, assumably due to legal issues, but by following the instructions from here, I was able to get it to work nevertheless. Here’s the process in a nutshell:

Once the 8bitdo app is correctly installed, you can use it as follows: 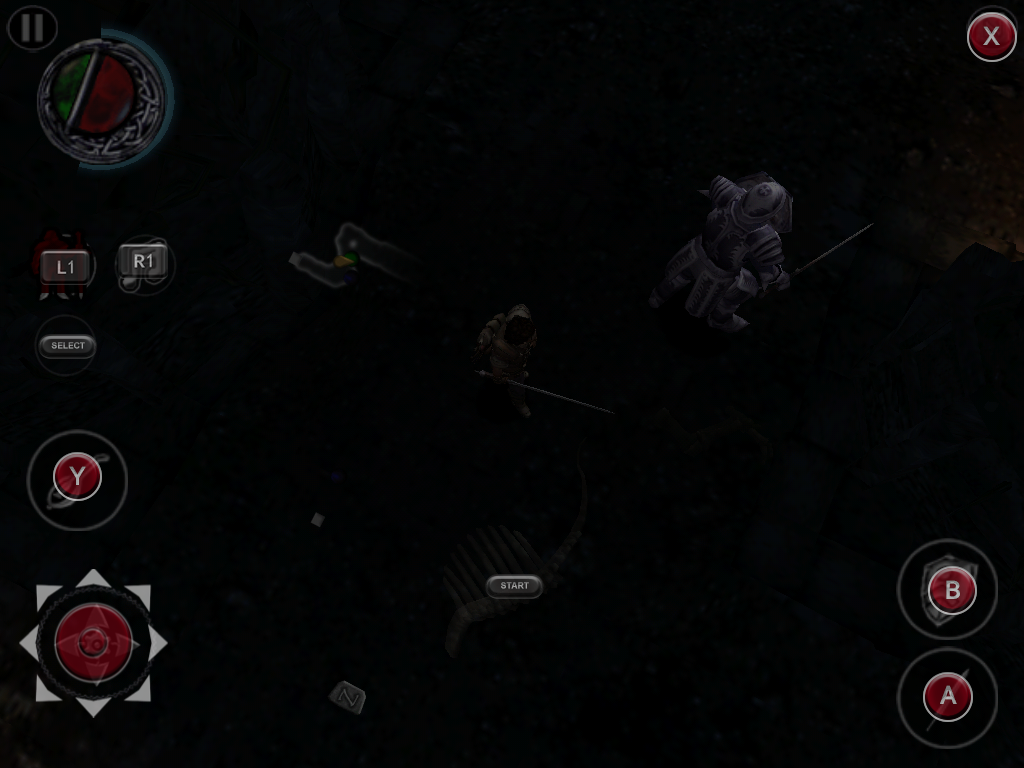 mapping The Bard’s Tale to controller with 8bitdo app